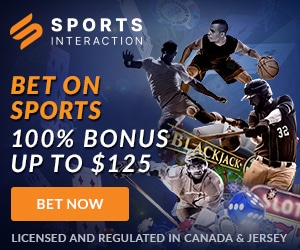 Sports Interaction is the #1 Sportsbook for Canadian sports betting needs.

Many bettors were filled with optimism last Thursday when the Thanksgiving favourites went 3-0 straight up while all three games played over their posted totals. However, the tides turned on Sunday. Bettors loved Baltimore, Tampa Bay, Tennessee, Chicago and Seattle to cover and not a single one of those clubs managed to win against the spread (ATS). As we head into Week 13, home teams have covered in about 50 per cent of the games so far while underdogs are cashing at a 56 per cent clip.

Thursday Night Football`s spread has seen some significant movement since the Buffalo Bills opened as 5.5-point favourites at home to the New England Patriots. While Buffalo is still seeing the majority of point spread bets, the Bills are now down to -4.

On Sunday, early bettors have three favourites circled on the schedule – Baltimore, Minnesota, and Dallas. The Ravens are seeing more than 80 per cent of the action as 8-point favourites against the visiting Denver Broncos. Minnesota, which may be 9-2 but is only 5-5-1 ATS, is taking nearly 90 per cent of the action as a field-goal favourite at home to the New York Jets. Meanwhile, bettors havent been scared of the weeks biggest spread, taking the Cowboys as 10.5-point favourites to cover against the visiting Indianapolis Colts on Sunday Night Football.

Finally, it seems as long as Tom Brady is in a Tampa Bay Buccaneers jersey, bettors are going to bet the Bucs. Tampa Bay is 5-6 outright and just 3-7 against the spread heading into Monday Night Footballs date with the New Orleans Saints. Oddsmakers currently have the visiting Saints as 3.5-point underdogs.
<h3><em>World Cup</em></h3>
The World Cups knockout stage will begin this weekend without Team Canada after they dropped their first two games of the tournament, but Canada still has one match left on Thursday against Morocco. Canada is set as a +202 underdog. Sports Interaction has a full page of Canada props live including whether Canada will score another goal, hit the post, or comeback to win.

The New Jersey Devils continue to make their brave betting supporters a pile of cash as they head into Wednesdays action well atop the NHL money standings. At 19-4 the Devils have earned 12.27 units for their bettors already. The Boston Bruins are a distant second at 9.18 units followed by the Seattle Kraken at 8.24. While we may only be a quarter of the way through the regular season, its already clear that some teams should be looking ahead to this year`s entry draft. Connor Bedard is expected to go first overall and could be an impact player right away. Anaheim is at +350 to draft him, followed by San Jose at +450 and Chicago at +597.